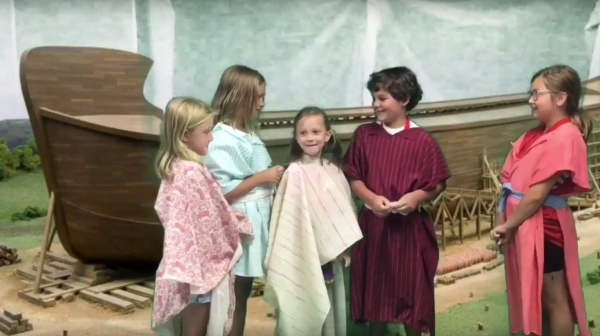 One of my favorite aspects of my work is showcasing great examples of digital ministry, lifting up work done at the parish level by people whose efforts don’t always receive widespread recognition.

But when an accomplishment is all about the process rather than the product, is it still worth recognizing and celebrating? Absolutely!

Christina Dorn is the Director of Christian Formation & Communications at Grace Episcopal Church in Anniston, Alabama. When planning “The Welcome Table” Vacation Bible School this summer, she had a hunch that adding video creation to the usual VBS activities would be interesting. She’d never created video content before. She wasn’t quite sure how to best proceed. But she had recently discovered the Green Screen app for the iPad. And she had two millennial-aged helpers. They all had a sense of adventure and a sense of humor. Even more importantly, they all shared a deep love of God and a calling to share that love with the children of their parish.

Christina decided that together they would give video creation a try!

They divided the 40 children, who ranged in age from 3 to 12 years old, into groups. Each group served as the cast for a unique video production.

On the first day of VBS, each group decided what story they wanted to represent. One group was intrigued by Noah’s ark and self-organized, making plans to bring stuffed animals from home. One group choose to represent Moses and the Israelites’ flight from Egypt. Two other groups selected the stories of Jacob and Esau and of Abraham and Sarah hosting celestial visitors. A note went home reminding children not to wear green during filming days so they wouldn’t disappear into the background.

On the following two days of VBS, during the brief 30 minutes at what Christina referred to as “interactive story time,” the children listened to their story, paying attention to the “cues” in it, and then watched a video version. The children looked at pictures that would be used as background scenery to imagine a sense of place in which the story might occur. Then, without rehearsal, the children responded, acting out the story in front of a green wall made from dollar store plastic table cloths. They made up their own dialogue, telling the story in their own language. Each story was captured in a single take. There was no opportunity to re-do a scene. This made for some funny unscripted moments, but it also invited the children to live into the story in a deeply experiential way. Details had to be ad libbed on the spot. For example, when Sarah unexpectedly ask the angel her name, there was a pause, and then the serious reply, “Angel.”

Christina was thrilled that the children engaged deeply in the story, not just intellectually and as a narrative, but from an emotional perspective. As she said, they engaged both “…head and heart.” The children were excited to tell the story, excited to make it come alive. They were intentional about their performance, wanting it to be thoughtful and not silly.

After VBS ended, Christina and her helpers got to work in post-production. Originally, they had planned to create separate stories, but watching the entire raw footage, they decided to do a highlight reel instead. Using iMovie, they plugged video clips into an existing theme that allowed them to add text overlay. The result? An unabashedly epic “movie trailer” full of joy and faith and fake beards and a plague of frogs. While it might not win an Academy award, the children were delighted and their parents enthralled. Christina is enthusiastically planning for more video creation in her ministry, this time with a real green screen and some auxiliary microphones. But for her, it’s not about the technical details or the content created but rather the value of the experience is inviting children to engage in a creative exegesis of scriptural stories.

Although digital technology and social media are often criticized as contributing to a culture of perfection where young people are tempted to offer inauthentic, curated versions of themselves, Christina’s work with the children of Grace Episcopal offers a fantastic counter-example. Used in a spirit of exploration, creativity, humor, and fun, digital media can be a wonderful way for young people to express themselves and their stories. Scripture provides foundational stories that are formational when they become a part of a young person’s identity. Acting out these stories and capturing them on video to be viewed repeatedly creates a unique opportunity for children to form their identity, both “head and heart,” in faith.

Great job to everyone involved in Grace Episcopal Church’s VBS movie-making! As Christina says, “We are a small church with limited resources. If we can do it, anyone can!”